While many Melbournians including a few friends, are in full training for the impending Melbourne Marathon, we feel like we are running one of our own. At one of Orla’s recent visits to the hospital when feeling somewhat exhausted, I exclaimed to the BMT consultant “this is like running a marathon” and she responded wholeheartedly, “that’s precisely what it is…”!! This particular marathon has no set course or training schedule and hence there have been a number of moments of late when I have felt I have developed an understanding of the term, “hitting the wall”.
The last time I posted was on Orla’s birthday. She had been to the hospital that day for an IV antibiotic as she had developed a temperature the day before. While she was there, she was spoilt with a birthday present from the staff and her nose was also swabbed. We received a call from the BMT fellow the next day to let us know the swab was positive for Influenza A virus -not ideal when recovering from a BMT! Ed must have had it and Orla had caught it from him….unlucky for both of them. Thankfully, Orla coped remarkably well (better than Ed!) however she needed to be watched quite closely and hence we visited the hospital regularly for the next couple of weeks. This was one of the moments which I would describe to felt like I was running a marathon, two-thirds through and faced with a hill to climb. Orla needed to continue on an oral antibiotic for an additional week following her initial IV doses. Throw this into the mix of a gut which was still recovering and Orla’s bowels reverted back to what they were like in hospital. The constant diarrhoea had her uncomfortable, sleeping more poorly than usual and the skin on her bottom starting to break down again.
As I said, Orla needed to be watched closely and we did have a few days of concern as her blood counts didn’t recover during this time as quickly as her BMT consultant would have hoped or expected. Because of this concern, she needed to have some extra blood taken on one particular day to check her chimerism. That is to make sure her blood cells were still that of the donor. Rationally we knew everything had been tracking well until this point although the consultant was concerned enough for the extra tests to be required, hence we were slightly worried. Fortunately, Orla’s counts recovered before the chimerism result was received so we all breathed a sigh of relief including the consultant!
The “hitting the wall” feeling is due to a combination of factors. Caring for a child undergoing a bone marrow transplant, as this blog details, is huge and the stress of keeping them free from infection is also socially very isolating. Plus, Orla is still not eating more than small tastes really. The nasogastric feeds are relentless and the time it takes to try to feed a child who isn’t just fussy but is almost needing to learn it all over again requires probably the most amount of patience I have ever required. Orla has been difficult to feed from the day she was born and 2 years down we are still not winning!! Add all this to the demands of caring for a child with considerable developmental needs.

Anyhow, things have settled down somewhat since, Orla’s gut seems like it is finally starting to recover and there is an element of feeling like we are on the home stretch as far as the bone marrow transplant is concerned. Orla had some blood tests taken a couple of weeks ago as she had reached the milestone of 6 months following her transplant. The tests measured her immune function which our doctor informed us are remarkably good at this point. This is obviously great news and Orla’s reward is that she gets to start her immunisations all over again!! The particular day we went to start the immunisations, Orla had a slight temperature so we had to return a few days later. Orla appeared to have a new found fondness for visiting RCH that particular week as we went there 4 times, twice because she pulled out her nasogastric tube. I’m yet to conclude if it was coincidental or not that Dad was on duty both of these occasions….Mum however was on duty both times when it was reinserted, the first in record time and the second took 4 attempts, not pleasant for anyone involved, fortunately Orla forgets quickly. At one of these visits, we learnt and we very saddened to hear that another of the children who overlapped considerably with Orla in the BMT unit passed away.
As a result of Orla’s BMT tracking well and immune system developing, she is now starting to slowly wean off the immunosupression medication, Cyclosporin, and a few of her other medications have also stopped now too. The other bonus is that Orla gets to lift her isolation status slightly. However the priveliges her BMT consultant suggested are those which we have already allowed ourselves!!
Orla is doing well with her many therapists and she now has a standing frame which she doesn’t mind in small doses!! (see below) 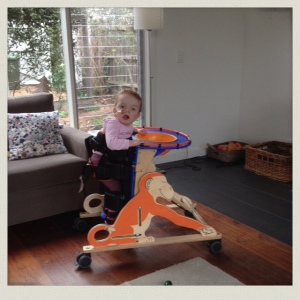